In addition to cost there is a noticeable difference between 4 year private and 4 year public colleges.  Data from College Navigator shows the most recent 4 and 6 year graduation rates.  The average for the small private college sample I chose shows a graduation rate within 4 years of 83% and within 6 years of 90% with a gap of 7%. 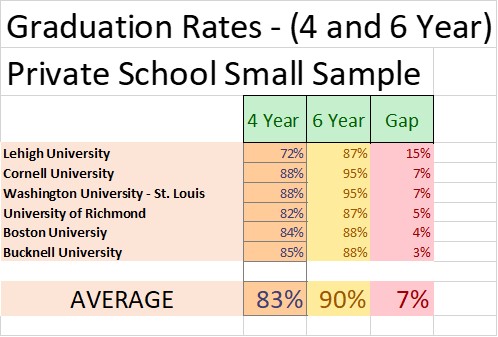 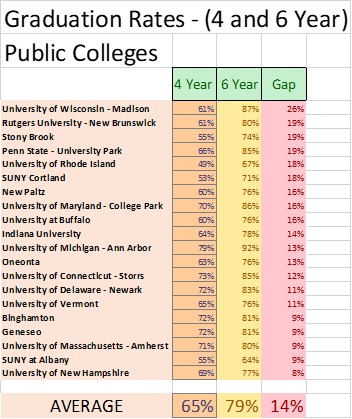 One often forgotten scenario is that with graduation rates creeping up beyond 4 years, that "extra year" is not an insignificant cost. For Binghamton, the 4 year graduation rate is 72% versus an 81% rate for 6 years. For University of Maryland the 4 year rate is 70% versus an 86% rate for 6 years.  So, if a NY state resident graduates in 5 years versus 4 (typically due to a change in major and another academic major re-start), that adds up to the 5th year total cost of $72,437. (see chart below). That is the cost of the additional academic year PLUS the opportunity cost of lost income for the job that they would have received upon graduation after 4 year's.  Basically, they delay earnings during the 5th year and have to pay the college for that 5th year.

A projection for the true cost of the 5th year at a public university:

When viewing costs alone, public universities appear to be the least costly, but the 5th year possibility reduces the public university cost advantage by at least some amount.

Conversely, private colleges look outrageously expensive on the surface, but all but the top schools have a "discount rate" that can reduce the cost of college significantly.  For example, according to Artsci,  "Bucknell, where the full cost of attendance is nearly $70,000 a year, had a discount rate of about 31 percent".

So basically, the public school price point is not as great as you might think and the private school cost is not as shocking, especially if you also consider opportunities for financial aid and merit scholarship.

Beyond cost, there are other pros and cons to consider for public universities.

There are so many elements involved when deciding whether the public institution is the better choice, so rather than trying to determine the “best”, it is more helpful to prioritize based on an individual student basis.

Special Super Groundhog Day offer for High School Juniors: Bring in your PSAT, SAT or ACT scores and get $175 off of our 15-pack private program AND get a voucher for a friend to take a full practice ACT or SAT test and test analysis.

Now registering sophomore and juniors for our college counseling program